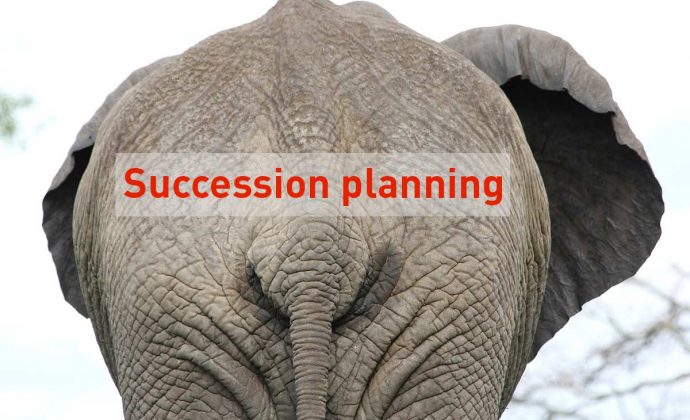 Succession Planning – How to remove the elephants from the room

So how do you remove the elephants from the room when it comes to succession planning? Perhaps we can use a technique from business circles known as a ‘premortem’.

It involves imagining at the start of a project that it has failed, allowing those involved to visualise why, so revealing the potential pitfalls and allowing them to be avoided.

It’s a way of anticipating issues before they cause problems and, let’s be honest, when it comes to succession planning, it’s not hard to imagine failure.

When will dad hand over the cheque book?
When will mum and dad retire and what money will they need from the business?
Who gets to make the decisions? What happens to siblings who don’t work in the business?
These are just a few of the issues that can put families at loggerheads.

Given that over 60% of farm businesses don’t have a succession plan, we know that the industry’s current approach to this fraught topic isn’t working. A new approach is required.

That may sound counter-intuitive, but talking about such issues can actually take the fear out of these difficult conversations. No more of the ‘elephant-in-the-room’ topics that no one dares mention. Instead, an upfront acknowledgement that the conversations will be uncomfortable and that some people may be disappointed, but everybody will know why the discussion needs to be had and that compromises have to be reached.

When you have talked about the areas you are going to fall out over, it should then be an easier conversation to find the subjects you agree on.

There’s probably quite a few of these. In an uncertain world, we know some things for sure. Mum and dad will die at some point. You want them to enjoy their retirement. We all want to pay as little tax as possible.

We want our family to be happy. We’d like to keep the farm as a farm (or perhaps we don’t, perhaps it’s simply been assumed that certain people really want to farm?). When it comes to succession planning, it’s understandable why people can be tempted to avoid the topic – they’re scared of upsetting their loved ones through the decisions they make.

The potential financial implications along with the ups and downs of taking (or not taking) succession planning action are highlighted overleaf. We are not trying to make light of a very serious subject but by using a visual example we can highlight the challenging issues and actions that need to be considered, together with what can happen if they are not dealt with.

A lack of action on succession planning ultimately upsets everyone and can cost the business a lot of money. It’s far better to face the issue head on and, like so many challenges in agriculture, try to break complex issues into more manageable chunks. Agreeing what you are going to disagree about may seem an unconventional approach, but at least you are agreeing on something – and it will begin this vital process.

Just in case you think we are over dramatising the importance of succession planning, Stephens Scown have just successfully won a £1.3m settlement for a client where there was a family fall out and despite working on the family farm for over 30 years for very poor wages and being ‘promised’ the farm it was left to their siblings.